Glowing with heavenly as well as earthly light, the Las Vegas temple of the Church of Jesus Christ of Latter-Day Saints and the moon in the heavens reflect illumination of a different kind, with the city lights of Las Vegas in the background.
This image, a composite made on January 31, 2018, was created during the rare Super Blue Blood Moon event (kind of like a triple-dog-dare) between 4:00 am and 7:30 am from an elevated observation site on Sunrise Mountain. This moon gets its unscientific name from a combination of three types of moons, all occurring at the same time.
A Super Moon is at its closest distance from earth and appears slightly larger and brighter than usual, although barely noticeable to casual stargazers.
A Blue Moon occurs under two different occasions: either the second full moon in one month or the third full moon in a season that has a total of four full moons.
Blood Moon is the name for a full lunar eclipse and can only occur on a full moon event. The term denotes the reddish color that overtakes the moon due to a phenomenon called Rayleigh scattering, the same effect that causes colorful sunrises and sunsets.

To make this image, the photographer set up tripod and camera at the onset and made repeated images with the moon first appearing high in the sky. By forecasting the arc of the moon and earth rotations, the position of the moon was predicted and possible to visually place along its path as the temple spires came into view. The image required changing lenses, however the tripod remained stable in a single location throughout the entire event. The composite was then blended and the final print was created. 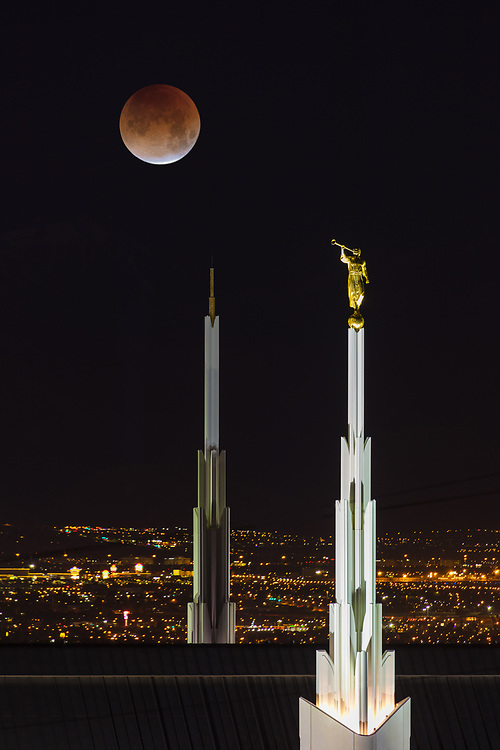